At 198.8 ft / 60.6 m, the SANOO yacht (not for charter) was built by Feadship, and launched in 1979, and refit in 2015. Accommodating guests in 8 staterooms, her exquisite interior styling is by Pierre Tanter (France)-Original / Zaniz Jakubowski (Italy)-Refit, while her exterior lines were drawn by De Voogt, resulting in an elegant, and stately yacht ready to welcome guests. Serviced by 20 crew, she has a beam of 31.8ft / 9.7m, and a draft of 10.5ft / 3.2m, along with engines that power her up to 15 knots at cruising speed, while maximum speed is at 19 knots. 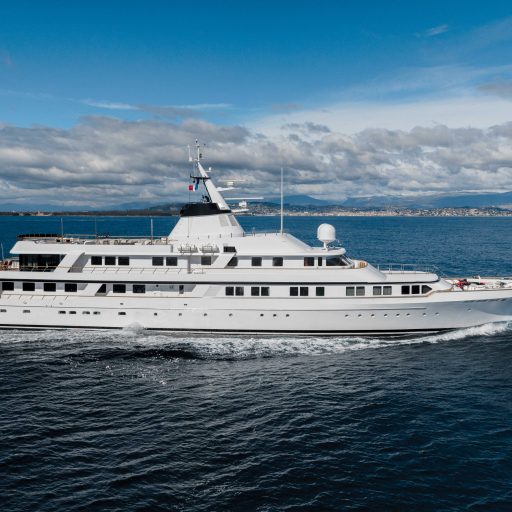 View the photo gallery page to browse
browse all the SANOO yacht photos ,
including interior and exterior images.

Not offered for sale or charter to U.S. residents while in U.S. waters unless under a boat show bond or in an FTZ.

Amenities Aboard The SANOO Yacht

For a complete list of amenities available or for a first-hand review of the SANOO yacht, simply request assistance from our qualified luxury yacht brokers. Our team of yacht specialists travel the world visiting and experiencing yachts for charter and not for charter. Because of this, they have expert knowledge about every luxury yacht for charter, and can provide further details about the features, amenities and condition of the most notable yachts on the water.

We provide accurate specifications, details and current information on yachts for charter around the world. Read the complete SANOO yacht for charter specs and analysis.

For more information or to enquire about the SANOO yacht for charter, simply contact a qualified yacht charter broker at Merle Wood & Associates for assistance.

SANOO Yacht For Charter Status – Not for charter


The SANOO yacht has been displayed to provide our visitors the most current and accurate data for this luxury yacht. If you would like to report an error or submit additional information on SANOO yacht, please contact our luxury yacht intelligence team.